Interlunium Wiki
Register
Don't have an account?
Sign In
Advertisement
in: Characters, Interlunium Members, Idols, I MY ME Staff

C!naH[3]
Chiyo Watanabe is an ever-joyful member of Interlunium. She is a part of the subunit BUNN.

Chiyo features in the songs Intergalactic Disco, Level Up! and Idol Road, and is the singer of Shining Step.

Idol by day, gamer by night, and hamster enthusiast 24/7, meet Chiyo Watanabe! She and her hamster Momo are practically inseparable. While she’s always running late, waking up late, and slacking off in practices (blame those idol sims of hers), when it comes down to it, Chiyo’s onstage performances are nothing short of incredible. Making her debut alongside Interlunium, she hopes you’ll support her, online or off, because she’ll always be on top of her game~![1]

On October 7th, Kaito and Hinata Watanabe gave birth to their beautiful daughter, Chiyo. As a child she was incredibly energetic, always wanting to play outside, dance around, and eat unhealthy snacks. She continued to be like this until she started first grade. Due to her uniquely green hair, the other kids thought she was gross and began to bully her. It was harmless at first but it kept getting worse as she grew older. Since her hair was usually in long double braids, they would sometimes try to pull on them, hurting her.

Because of the constant bullying, Chiyo became more and more reclusive. She would avoid playing outside or dancing around and instead nap and play videogames. One thing that did stay the same was that she would keep eating junk food.When she was eight, her parents wanted to cheer her up, so they planned a family trip to the zoo. Despite Chiyo’s gloomy and reclusive personality, she had a fantastic time learning more about the animals and seemed to have some of her old spark back. Her parents were ecstatic, and they thought maybe it would be best to get her an animal to accompany her! Since they lived in an apartment where they weren’t allowed to have big animals, they decided to wait a few more years before surprising Chiyo. They instead took this opportunity to take their daughter to the pet store, where she instantly fell in love with the adorable hamsters. She was mesmerized by them and their cute little chubby bodies. Sometimes, the store clerks would even let her hold them! She wanted to see them so much that anytime they would leave the apartment, she would ask to go to the pet store to play with the hamsters. In her mind ,she felt like Cinderella, but instead of mice ,she had hamsters. School was still awful for her, but at least she had the furry, adorable creatures to keep her company.

When she turned 11, the bullying got to an all time extreme. A girl, who initially was being nice to Chiyo, invited her to meet behind the school after class. Chiyo went eagerly, thinking she might make a friend, but when she arrived there were three girls waiting, two who had been bullying her and the girl who had invited her. They said they were going to “help” her look pretty, so they grabbed ahold of her long braids and pulled out a pair of scissors. Terrified by what was going on, Chiyo screamed as loud as she could and a nearby teacher came running, but the damage had been done. They had already managed to cut off half of one of her braids, making her hair only down to her chest, rather than her waist. The girls were all severally punished and Chiyo’s parents took her to a salon to get her hair fixed.

Soon after, Chiyo’s parents purchased a house and they moved schools. They hoped this new opportunity would allow Chiyo to move on from being bullied and start a new life. Chiyo also decided, in the case she would ever be bullied again, she would start wearing her hair differently so it wouldn’t be so easy to grab. She thought long and hard about the design and decided to put her hair up in two little buns. She had a new found confidence because the two buns made her think of cute little hamster ears. Even though she was twelve years old, she would still rather sleep than study, causing her not to do very well in school. She eventually also descended into the proverbial, “Idol Hell” when she discovered a popular rhythm game and played it non-stop. It continued to idol anime, other idol games, and even real-life idols. She admired them for being so happy and playful. Chiyo thought that if she ever became an idol, she would finally be able to prove to herself that she was worth something. She wasn’t going to just be the girl with green hair and no friends, she wanted to make a name for herself. She started to learn how to sing all of her favorite songs and sometimes would learn the dances as well if she felt like it. Because of her constant lounging, she was out of shape and it made dancing a hassle for her. A year and a half later, I MY ME was holding open auditions. She thought that this was the opportunity she was looking for. Even though she was still young, Chiyo felt confident in herself and wanted to try!

She practiced one of her favorite songs and went confidently into the auditions. Her parents let her know that once she returned, they would have a present for her. For the first time in a long time, she felt like she could do anything. She went in and she felt like she shined. Sadly it wasn’t enough, as she was not accepted into the company. However, one of the producers seemed to take a liking to her. She went home feeling like her dreams were just crushed. Her parents could tell it didn’t go well but hoped their present would still help. They handed her medium-sized box with holes in it and once she carefully took the top off and peered in, she saw an adorable little newborn hamster. Chiyo was so ecstatic that nearly all her sadness was washed away! She quickly named her new friend Momo, and ran up to her room, where a cage, hamster food, and hamster toys were waiting. She stayed up all night caring for her new friend, making sure it was well fed and comfortable. Chiyo, soon after, turned fourteen and had a sort of new found spirit thanks to her furry animal friend! She still didn’t make a lot of friends, but she was in a better place mentally. Time continued to pass, and Chiyo began to grow slowly alongside her hamster.

The producer who had taken a liking to her during her audition couldn’t stop thinking about her. She had so much passion and ambition, but her talent wasn’t up to par. He saw big potential, despite the fact that she needed some work. After long and careful consideration, he gave her a call and told her he wanted to scout her. Chiyo was ecstatic, feeling like she was being given a second chance. She asked if she could bring her pet hamster with her to the idol dorms, which he promised he’d arrange for. She told her parents, who were extremely happy and proud of their daughter, who promised they’d come to all her events. Chiyo soon moved to the idol dorms and transferred to a nearby school, thus beginning her new journey as an idol! But first, she had to go through rigorous training, which she passed, albeit not with ease. Then, she had to wait to be assigned a producer, which took a lot longer than expected.

Chiyo is a bubbly and energetic girl, yet she is often unsure of herself. She can be quite gullible and oblivious, leading her to be confused in many situations. Even though she isn’t always confident in herself, she gives everything her very best try. She may not be the brightest in the group, but she definitely has one of the biggest hearts!

Her Blood Type is O-.

Her Fantasy Class is Beast Master. 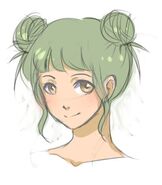 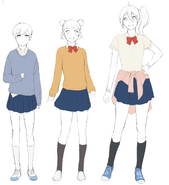 Chiyo and her voice provider Lizz. Drawn by Swakoo for Lizz's birthday.

Community content is available under CC-BY-SA unless otherwise noted.
Advertisement